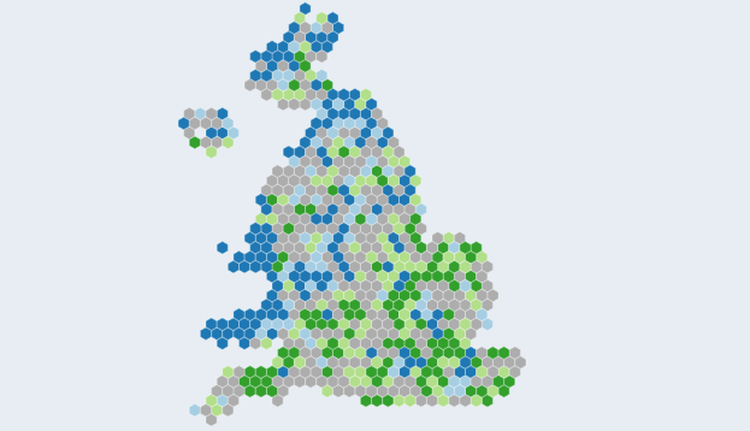 With the next cycle of the boundary review argument kicking off, I have made a set of maps visualising if constituencies are currently over and under the average voting weight.

The way to think about these maps is a flow of representation from blue (currently over represented) to green (currently under represented). Grey constituencies are inside a 5% leeway of equal weight. 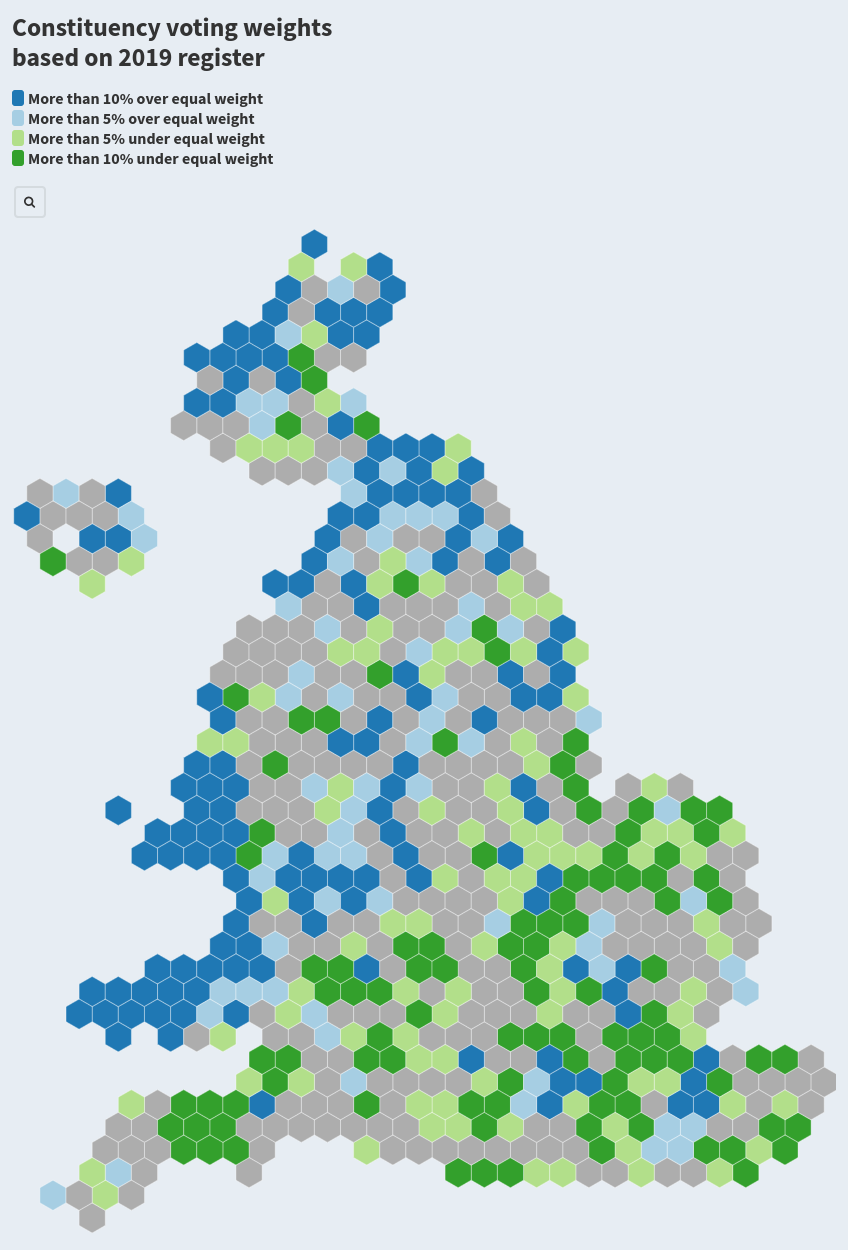 In general, the flow of representation is south and east. Because one of the features is ending different quotes for different nations, the most visible impact is in reducing over-representation of Wales.

What are the political implications of this? Broadly, as shown in the next chart, constituencies currently claimed by the Conservative Party have a lower weight compared to other constituencies, and so should expect to be a net beneficiary of equalisation based on the electoral register.

An important point is this is just the likely political impact, and is not inherently a fairer result. Equal voting weights are just one requirement for political equality, and other violations in the UK are more significant. It would be strange to take a party that is currently governing with a majority based on a minority of the vote and say it is under-powered.

While in general things being equal is better than than not being equal, the key question is exactly what is being made equal.

The current boundary system assumes the metric to equalise is the number of registered voters. The registers are known to be systematically missing certain groups and to decay in accuracy over time. An alternative would be to (as was the case until 1948) equalise constituencies based on census figures on the number of people living in an area, rather than just those who have registered. The next map shows the change if equalising on overall population*:

This shows an even heavier imbalance, flowing in the same south east direction. However, the political impact of this is smaller and in the opposite direction, with Labour seats being under weight and Conservative and SNP seats over weight. The loss of over-weighted Welsh Labour constituencies is balanced by London Labour constituencies that are weighted lower by a population rather than register approach.

It would be reasonable to argue this is not a fair comparison. Some of this movement is now reflecting parts of the population that cannot vote, either because they are too young or because they don’t have a Commonwealth or Irish citizenship.

To understand more about this, we need an estimate of the vote eligible population. The different annual mid-year predictions for constituencies in individual nations make it easy to count adults, but there is not a complete or recent estimate of how many of those adults are eligible to vote. Using the proportion of vote-eligible adults by constituency in the 2011 census for England and Wales the adult population figures were adjusted downwards by each constituency, with constituencies in Scotland and Northern Ireland adjusted downwards by the average percentage for that nation. That gives us a distribution which again has broadly the same pattern of geographic movement, but the political impact is virtually nill:

While the SNP still as a party have a higher voter weight on this metric, other parties do not. The Labour and Conservative parties still have a wide range in their seats, but their median value is both around 1.

While redistributing based on estimates of eligible population would cause a shift in political outcomes even if nothing else changes, it is less clear there is such a systematic difference as there is in the register approach.

While the direction of geographic redistribution of voting power is broadly similar, the political effect of all three metrics is different. The important question is then if there is a reason to prefer one method to another (aside leading to results you prefer).

I have a longer piece in the pipeline exploring this in more detail, but it roughly depends if you think the thing you are equalising is the political power of voters (in which case, the key problem isn’t boundaries but the voting system), or if you are trying to equalise the access of people to the representation-as-a-service aspect of an MPs job. [Update: that piece is here].

* This is 2019 population based on an extension of mid-year estimates for 2015–2019 until the new dataset is released. The results are not notably different using the 2018 data.