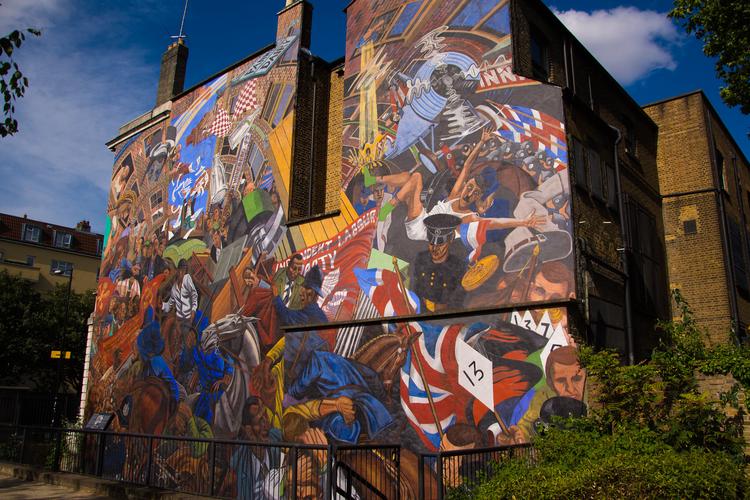 Sometimes political traditions tell their story through events that are less stressed (or absent) from the general history. In the same way that the memory of a war between two countries might be important in one but forgotten in another, political traditions can not only have different interpretations of the same events, but entirely different understandings of which events were important.

I was living near Cable Street the other year and wanted to learn a bit more about the famous history of the area. One of the things that came out of what I was reading was how the event and the story of the event were separate things. The history of the event included conflicts not just about what actually happened, but the appropriateness of how stories of that event had been used.

The idea of a “Battle of Cable Street” gets used as part of modern “is it okay to punch a Nazi?” debates. Generally it is used to say that there is a lesson from history that anti-fascist violence is a necessary and successful component of resistance. Fascists aren’t defeated in the marketplace of ideas, but on the streets. Sometimes this point is made explicitly, as in this New Statesman article:

And when it comes to Nazis marching on the streets, the lessons from history show that physically opposing them has worked. The most famous example is the Battle of Cable Street in London, in which a march by thousands of Hitler-era Nazis was stopped parading through East End by a coalition of its Jewish Community, dockworkers, other assorted locals, trade unionists and Communists.

There was also the Battle of Lewisham in the late 70s when anti-fascist protesters took on the National Front. Both these battles, and that’s what they were, helped neuter burgeoning movements of fascist, racist far right thugs who hated minorities.

Or this Guardian article:

The left has a history of breaking such contemptible political currents, and it is that history that we must tap into and learn from today. As the battle of Cable Street proved in 1936, and the civil rights movement proved again and again across the south in the 1960s, the only way to defeat fascists and white supremacists is to meet them head-on in confrontation, with strong working-class social movements in the streets.

Sometimes it is just as a shorthand where it is obviously so.

The reality seems more complicated than this. One of the more striking points in the literature was the idea that the British Union of Fascists (BUF) grew in numbers and support in the East End after the march:

In the following week, the Mosleyites held their most successful series of propaganda meetings since the BUF’s inception. Audiences estimated in the several thousands attended BUF meetings in Stepney, Shoreditch, Bethnal Green and Stoke Newington. Just as significant was the mood of these audiences, which was enthusiastic and manifestly pro-fascist in orientation. The BUF’s membership also increased substantially immediately subsequent to the Cable Street affair. A police report confirmed that in the following three weeks the BUF’s ‘London Command’ enrolled 2,000 new members, the majority recruited by its East End branches. (Thomas Linehan, p. 23)

So Cable Street can’t be seen as a straightforward success and defeat of Mosley. But it’s not an easy “anti-fascist violence just drives people to the far-right” message either. Part of the reason for this growth was the push-back to the march was felt as a setback that warranted a lot of subsequent work to undermine the anti-fascist interpretation of events. This involved spreading the idea that participants were gangsters and a paid mob, as well as greater investment of resources into the fascist movement in East London:

The first explanation for this, and what proved an irony of Cable Street, is that the anti-fascist mobilisation, rather than driving Mosley out of the East End, had the effect of intensifying his activities in this area. Wounded by the 4 October reversal, Mosley felt obliged to take up the challenge posed by ‘Red Terror’, ‘Jewry’, ‘lawless anarchy’ and all the other forces he imagined were behind the anti-fascist mobilisation. This resulted in the diverting of the greater part of his resources to the East End, a propaganda effort that produced the impressive recruitment gains outlined above and which culminated in the BUF’s substantial electoral returns at the March 1937 London County Council elections, when it attained 23 per cent of the vote in Bethnal Green north east, 16 per cent in Limehouse and 14 per cent in Shoreditch. (Linehan, p. 24)

This straightens out some lines of agency, in that fascist (rather than anti-fascist) efforts are responsible for fascist success, and that the event was definitely seen by the fascists themselves as damaging and successful. But this challenges the idea of the battle as a definitive or enduring victory.

Mixed in with this discussion is not just the question of “was it a setback for the BUF?” but ideas of solidarity and assistance from the broader community towards the Jewish targets of the BUF. But if Cable Street is not an end but instead an event in an on-going series of reaction and counter-reaction, active confrontations with the far-right may not have been positive for people the BUF targeted. Daniel Tilles makes the argument that Cable Street had immediate negative consequences in a History Today article:

The very next weekend saw the most serious antisemitic violence of the interwar period, as a gang of 200 youths, some armed with iron bars and hatchets, wrecked and looted Jewish shops, set alight a car and threw an elderly Jewish man and young child through a window. This marked the beginning of a sustained period of harassment. The JPC noted with concern that early 1937 had witnessed ‘an intensification of Fascist Jew-baiting and hooliganism’. Over the summer this developed into full-scale ‘terrorism which appears to increase week by week’. Numerous Jews were assaulted and shop windows smashed, antisemitic graffiti proliferated and Fascist speeches became more vitriolic.

However laudable the motivation of the Jewish participants that day, the primary consequence of their actions was to make life significantly worse for their fellow Jews in the East End, with their involvement used to justify the commencement of the most intensive phase of anti-semitic activity in modern British history.

This gets into complicated territory about agency that is mirrored in current debates. Did anti-fascist action directly cause additional anti-semitic action? No, the BUF were human beings who had agency and made choices. Was anti-fascist action part of a chain of events that shifted the nature of BUF activity? This seems true, but does it also follow that the counterfactual would have been better? That action can turn out to be counter-productive in complex systems is of course sometimes true, but generalising this point can take you past what the evidence can usefully say.

There aren’t easy lessons for the effectiveness of anti-fascist action from Cable Street. It’s not an “anti-fascist action only helps the far-right” story, because it was clearly interpreted and reacted to as a setback. It delivered an effective blow to the BUF, but not a killing one, which led to reaction and a terror campaign against the people the myth says were protected because of “the battle”. History gives us no reason to be flippant that anti-fascist action leads to only positive results, or that there are no good reasons to be cautious about it.

But if Cable Street doesn’t teach us that violence works, does it teach us something else? Janet Cottursi’s article in Standpoint magazine argues that we should learn something instead about the power of the press and advertiser boycotts:

The single event that put a dent in the BUF’s power and propaganda was the end of its access to the press. The Daily Mail and Daily Mirror were its main propaganda tools. Their owner, Lord Rothermere, stopped supporting Mosley after the fascists were accused of initiating brutal violence during a meeting at Olympia in 1934. After that meeting, Rothermere’s Jewish advertisers in the UK threatened to pull their advertising unless he stopped editorially supporting Mosley. [5] Without the press, the BUF’s message was limited, and its membership dropped to 5,000 the following year. The final nail in the BUF’s coffin came in 1940, when the government banned them after the start of WW2.

This is a different use of Cable Street that sees the ‘violence works’ message as a false lesson. It uses Cable Street instead as support for the idea that boycotts and lack of publicity are effective ways of shutting down unacceptable groups. I quite like this idea, but again, the use of history needs to be questioned. Shouldn’t we dig a little more about a story about the downfall of British fascism that blames wealthy Jewish people? Following footnote [5], you end up finding the source of this information is a conversation between Rothermere and…. Hitler:

Lord Rothermere, who at the time had just published two articles in support of the Mosley movement, himself described to me at the Berghof how the Jews went to work, and how it was quite impossible at short notice to take any effective counter-measures. It has been from the beginning one of my most potent sources of strength that I made all the newspapers of the NSDAP, unlike all the other newspapers of similar importance, completely independent of the Jewish advertising agencies and thus impervious to economic pressure of this nature.”

Regardless of if boycotts were effective, the evidence for their success or failure should probably not involve taking what people told Hitler at face value. The debate over boycotts is also one with differing perspectives in the Jewish community of what the right lessons are:

[..][U]nder the surface of consensus concerning 4 October 1936 were battles over memory, some of which were as old as the day in question itself. First, there were still some in the Jewish community who regarded the stance taken by the Labour Party and the Board of Deputies of British Jews as correct: ‘What stopped the fascists was not violence against them, but the denial … of press and radio publicity, and of halls for public meetings.’

Others doubted whether it was appropriate for the ‘Battle’ to be commemorated, especially as it would be alongside those on the left who were deemed to be ‘anti-Zionist’ and thus hostile to real Jewish interests.These were relatively isolated voices from an older generation within British Jewry, but they act as a reminder that responses to racism and attack are more likely to divide ethnic minorities than unite them. (Kushner, p. 159)

This last extract shows that violence vs boycott is an old debate, and not one entirely about the relative evidence. Here, a debate about tactics is also in part a factional dispute. An argument that says boycotts were effective justifies a minimisation of Cable Street as a counterproductive or ineffective effort, under-cutting its use by other groups.

Do boycotts work? It fits my ideals to think so, but the historical arguments can’t be used easily. If there’s any useful lesson, it is that to be careful when lifting evidence from debates of the past. Those facts were weapons in their own wars, and may not always travel easily.