The changing face of the political chicken 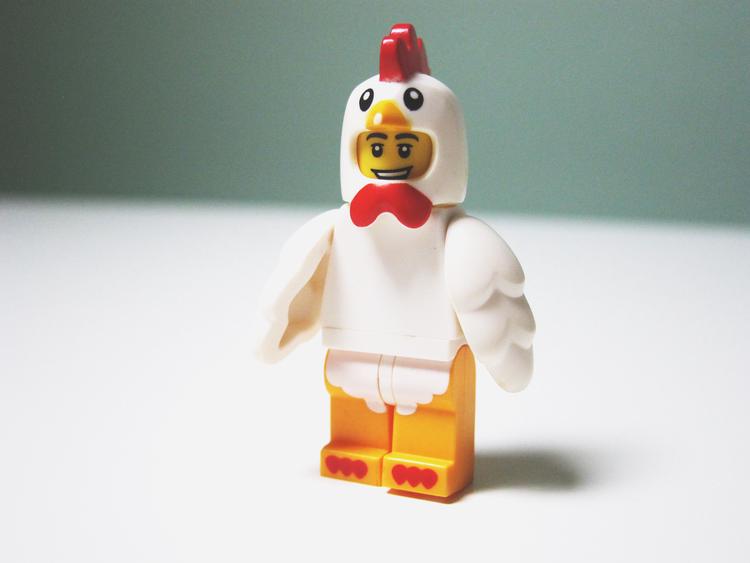 We live in a world of animal suit politics. Elections are attended not just by chickens, but badgers, dolphins, elephants, foxes, goats, rhinos, and so on around the zoo. They’re not just part of the background of elections, they’re becoming part of the grammar — where different animals have different meanings. Think of them like GIFs, but sweatier.

They usually represent attempts to gain coverage or exposure for a cause, or an argument that is being conveyed conceptually through the choice of animal (with varying degrees of success).

Animal rights campaigns are for obvious reasons frequent users of animal suits — but these uses tend to be fairly literal. Horse costumes protested against horse-carriage rides in New York. Seals protested seal clubbing, Brian May led an army of badgers to oppose a badger cull (These badgers ended up in conflict with a BNP demonstration). In 2013 an Albatross protested a decision to allow deep sea oil drilling off New Zealand’s North Island.

There are more conceptual uses in protests and politics, penguins were used in a protest against the Turkish President in reference to CNN Turk airing a documentary on penguins rather than cover protests in Istanbul. A yak was part of a Tibet protest at the Chinese embassy in 2008. A squirrel was used by the Republicans in 2014 against Hillary Clinton, with the slogan “Another Clinton in the White House is Nuts” — which is a bit of a leap, but they already had the squirrel because they’d previously used it as part of their campaign against ACORN, a voter registration group.

There are other examples where the animal isn’t just part of a concept but is more directly a metaphor. Dolphins involving ‘flipping’ — either ‘flip-flopping’ or house flipping. A man in a dolphin suit was part of an independent election campaign against John Bercow in the 2010 election (there’s a video), and Flipper Mitt was protesting Mitt Romney in 2011. Ostridges are for saying someone has their head in the sand (in this case, John McCain). For the 2004 North East devolution referendum, the No campaign used a large inflatable white elephant (direct metaphor) while the Yes campaign had a man in a rat suit (obliquely representing the concept that the No campaign was ‘Rather Arrogant Toff Southerners’).

One of the more common uses of animal suits in politics is chicken suits. These were used politically in the 1990s but have a precursors in the 1970s — when Gerald Ford addressed the chicken mascot of a local radio station while on campaign. A New York Times reporter then promptly bought the costume off the station and showed up to a press event in it as a prank:

The next use of a chicken suit was in 1992 and started as a one time, grassroots stunt to show up to a George HW Bush campaign event. Seeing both Bush and journalists react to the chicken, the stunt was then repeated in the local area, and the Clinton campaign took it up to send chickens to other events.

This chicken had an explicit political goal — to hound George H. W. Bush for stonewalling debate negotiations and gain news coverage on that issue. Importantly in the initial case, it was demonstrated this worked and then scaled up.

While obviously there are lots of things you can accuse a politician of being ‘chicken’ over, this specific use to shame over lack of debates became one of the more common forms of the chicken. This 1992 version is the inspiration for events in season six of the West Wing where Josh Lyman similarly deploys volunteers in chicken suits to hound opponents who wouldn’t debate his candidate.

The idea of the chicken crossed the Atlantic for the 1997 election, giving us the ‘Tory Chicken’, who followed Tony Blair to highlight that he had declined to debate John Major. This quickly got much weirder, spawning a fox to chase the chicken off and a rhinoceros opposed to the idea of animal suits entirely:

The chicken was to follow the Labour leader, who was campaigning in the marginal Tory seat held by Michael Forsyth, the Scottish Secretary. However, his efforts to henpeck Mr Blair were hampered by a man from the Scottish Daily Mirror dressed as Freddy the Fox, who blocked his path during a 15-minute walkabout.

As Mr Blair approached, the chicken was seen to stumble and was pushed to the back of the crowd surrounding the Labour leader, where it waved a placard before skulking off. A jubilant Freddy observed: “I had him for dinner. I stopped him getting anywhere near Tony. Tony shook my hand and thanked me for it.”

However, Mr Blair’s guardian refused to identify himself, saying: “The whole thing is embarrassing enough as it is.” The incident came at the end of a traumatic day for the Tory chicken. Earlier, he got into a nasty fight with a rival chicken with a detachable head, sent by the Mirror newspaper, as he strutted across College Green in Westminster. He was also pursued across London by another fox, two teddy bears and a plastic rhinoceros.

The Independent has more details about the bears and rhinos:

“We’re from the Bear Alliance,” said one. “We’re holding picnics for MPs outside Parliament,” said the other. “But we only want to discuss the bare issues.”

Within minutes, they were joined by the Mirror’s fox and the rhino, apparently hired by the London Evening Standard’s “Londoners Diary”.

There’s probably a cautionary note in reading back old coverage of whimsical stories that the details might be slightly exaggerated. In 2019 there were stories of Nigel Farage being stuck on his campaign bus due to a milkshake-wielding mob — that further reading in the original article is revealed to be three people with milkshakes at the back of a crowd. It’s easy to see how the more outlandish mob claim could be taken at face value in twenty years time.

A campaign chicken is different from the grassroots volunteers that followed Bush, and Daniel Finkelstein has written about the difficulties of keeping the chicken sufficiently motivated:

Surprisingly, the chicken’s appearances failed to improve our poll ratings in the way we had anticipated. And then a rumour began to swirl around Conservative Central Office — the chicken had doubts. He was thinking of coming out for Labour.

For the rest of the campaign, it became my job to buy the chicken lunch, empathise with him about the difficulty of finding jobs in the theatre and make sure he fully appreciated that new Labour would mean new danger.

Gary Ling has a surprisingly detailed account of trying to get the chicken into a Blair event in Edinburgh, although when it got to Stirling a teenager ran off with his head. There was even a Matt cartoon. Generally the man inside the chicken wasn’t happy and after the election:

The Tory chicken who trailed Tony Blair during the general election campaign has put in another appearance to turn the tables on his former employers. The chicken — 39-year-old Noel Flanagan — arrived on the green outside the House of Commons as the results of the second ballot for the Tory leadership were announced, to protest about his treatment at the hands of the party. Dressed in his fluffy yellow outfit, he carried a half empty bottle of wine and a placard reading: “Stuffed by the Tories.” The chicken protested: “They chucked me out after the election. I’ve been mistreated, and whoever wins this leadership election has got to take me back on.”

Separate to this the Daily Mirror also had a chicken (and the above article has a description of a physical fight between the two chickens), and the Mirror would go on to send another chicken after Cameron, Clegg and probably others in the 2010 election. That chicken’s name was Lee Cain and in July 2019 he became Boris Johnson’s director of communications.

During Boris Johnson’s run for London Mayor in 2012, Labour launched a chicken suit campaign of their own — with this video of the future prime minister being chased outside City Hall by a man in a chicken suit:

In some respects this is a similar use — drawing attention to a lack of debate. But this is also a different kind of media campaign because the man in the video isn’t Boris Johnson — it’s just a man in Boris wig.

While generally not a great idea, the 1997 campaign had a clear goal of undermining Labour media events with something bold that would at least get an “also, the Tory Chicken showed up to remind us about the lack of debates” into news stories. This 2012 chicken was an attempt to generate buzz on social media — that might then translate back into news stories. Given this didn’t really work, it’s hard to see if this was a correct interpretation but shows how use of the chicken suit is responsive to the media conditions of the time.

In 2019 this has gone even further to Jeremy Corbyn being photoshopped into a chicken suit (and actual, not particularly appetizing, chicken sent to journalists) by a communications team that will include the former Mirror chicken. Rather than debates, this happened in response to opposition parties not voting with a motion to call an early general election.

This has at one level understood that the governing party doesn’t need to muscle in on Labour’s media events — but has missed the broader issue that in the UK the chicken suit hasn’t really been deployed by winners. It’s an underdog tactic to try and use a gimmick for coverage — but there is always the risk that this backfires.

There is also the issue of the power imbalance it suggests. The 1992 Clinton chicken was asking the current president for a debate, the 1997 conservative chicken was asking the leader of the opposition for one. While the conventional wisdom has been that any opposition would look ridiculous to refuse an opportunity for an election — this possibly hasn’t factored in that the government (who run the country) trying to shame the opposition (who don’t) into an election suggests a slightly different power weighting. But time will tell on that.

For entirely unrelated reasons, you can’t vote in a chicken-suit in Nevada.