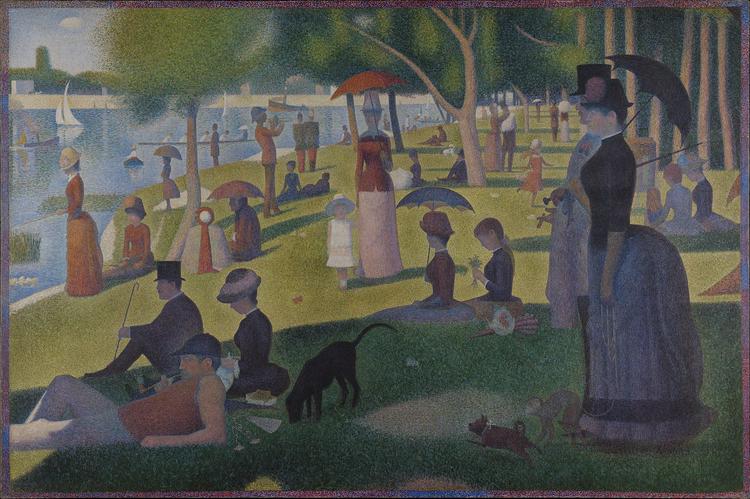 In the weeks leading up to the full lockdown, Trainline put up a new form to handle cancellations resulting from Covid-19. What was their motivation for doing this? Is this an altruistic gesture by a company to help as many people get their money back as possible? Or does it reflect that their normal way of handling cancellations (phone calls) was overwhelmed by demand?

In general, organisations put forms online either because they want information, or because people are giving them information through other means they are not able to manage. In this case, they want to “channel shift” into a medium that is cheaper to deal with.

I bring this up because last week several police forces have set up online forms for people to report violations of lockdown regulations. The reaction I saw online is negative, complaining that the police were encouraging people to report their neighbours.

This suspicious attitude isn’t coming out of nowhere, there is a stream of instances where police forces have either been recorded enforcing (or directly announcing) versions of the restrictions that are not law. But, as with the ticket company, actions can’t be seen as resulting entirely from the ‘character’ of an organisation, but understanding the demands being made on it.

There have been stories for weeks about the number of calls made to police forces about perceived violations of guidelines or regulations. Derbyshire’s police chief said in early April that 11% of the force’s 2,300 calls a day were from members of the public about breaches of social distancing restrictions. Like other forms of reporting anti-social behaviour, some of this is people score-settling:

We are getting calls from people who say ‘I think my neighbour is going out on a second run – I want you to come and arrest them’. We have had dozens and dozens of these calls.

When most of these aren’t useful, this is a waste of resources and shifting to an online form frees up phone lines again. This desire to get people off the phones is clear in the official comms around these new forms, for instance this tweet from Cambridgeshire Constabulary: 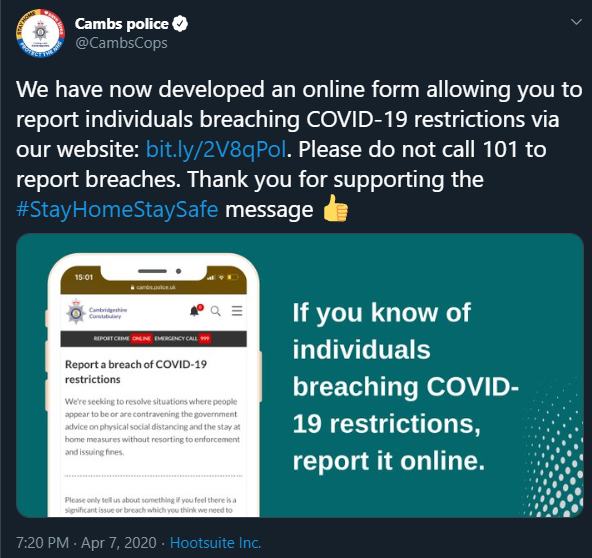 I’ve mapped the options in the Greater Manchester Police’s form (which is the same as the Met’s), and what is notable is the frequent re-stating of what they are interested in (discouraging reporting), and sorting into different boxes based on what future action is likely to be (large group of 20+ meeting happening now vs individual report). As with reports of dog fouling, this might be meant for immediate action, to shape future patrol patterns, or to give members of the public a relatively cheap outlet for complaints. Putting a form asking the public for information might mean you are very engaged in the answer, or it can mean just the opposite.

A YouGov poll conducted on 31st March (in corona-time, years ago) found that 42% “fully support the approach taken by the police” and another 14% thought they “should take tougher action to ensure public compliance”. Police actions at the moment need to be understood in the context of a reasonable amount of support for current actions, and a lot of demand on reporting services from a small number of people. This demand, if shifted online, creates more capacity for the kind of covid or not-covid related reporting that more would agree is a priority.

But on the other side, while that survey found 51% of respondents were comfortable with asking people to report violations, 42% were uncomfortable. I think this would be a reasonable response to seeing a form asking for reports for the public that includes an option for reports on individuals. It is strange and unsettling that everyday activities are now falling under the umbrella of the kind of reporting systems previously used for anti-social behaviour complaints. Those who have previously encountered reporting behaviour under those systems know that who calls the police and who has the police called on them is not evenly distributed. Reports might be for personal score-settling, but can also be to try and direct the resources of the state to police social boundaries.

Online forms can reflect a range of motivations (from being very concerned about people going jogging twice, to wanting to separate and ignore those reports), it is important to track and understand how discretion is used in following up reports. While possible action is shaped by who reports, what policing looks like under Covid is also a result of what police forces choose to do with that information.