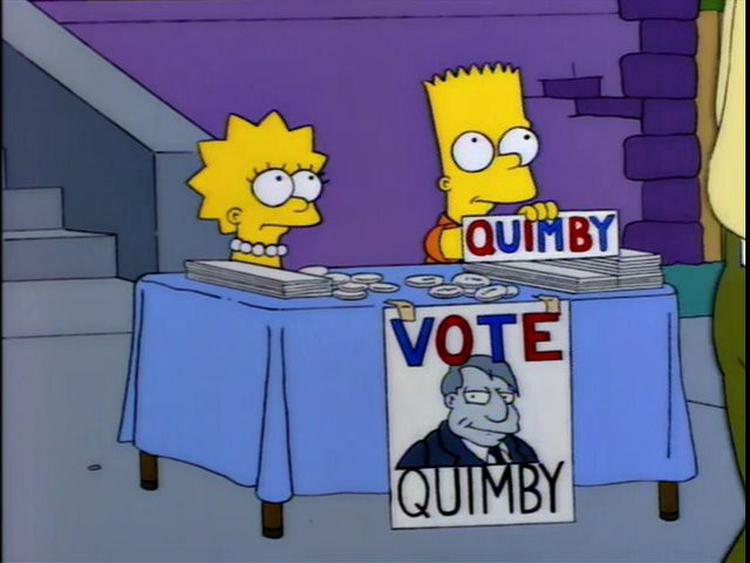 I went to a #useyourvote event last night that was all about talking to young people about how they felt about political engagement - and that got me thinking, so I’m self-plagiarising a few old blog posts to create a fun new post about the problem of children for democracy.

Democracy has a problem with children, ‘assume a population of adults’ is the spherical cow of democratic theory — but it’s one of the big issues! A group with distinct interests excluded because because they’re less educated and less able to intelligently advocate for that interest? A group by law required to spend a huge amount of their time in state institutions? That sounds complicated! This gets more complicated when you start thinking about Democracy (Upper case D) worldwide. Sure in the UK the proportion of the population under fifteen is only 18%, but in Iraq and Kenya it’s 41%, in Afghanistan 45%! In places where the proportion of children to adults almost approaches parity, how can any theory of democracy that treats children as something awkward at the margins not be severely flawed?

The common debate in votes for children is to move the vote to 16, but there’s a convincing argument that this isn’t properly grasping the problem and if we’re going down this route, you might want to extend some from of vote to people far younger.

Arguments for votes at 16 often make the argument that people at 16 are fundamentally similar to adults who can vote, and so denying them the vote is inconsistent. They can pay tax, they should vote! They may be pretty dumb, but so are most 18 year olds. And also a fair few 80 year olds. If not knowing much about anything disqualifies you from voting, there are more fundamental questions we need to ask here.

What the ‘Marriage’, ‘Tax’, ‘Army’ trio (all which have issues, but anyway) argument is getting at is the idea that we have a norm for granting a set of rights at 16 and voting rights should be included in it. This is a helpful argument for advocates of lowering the voting age because it allows an appeal to precedent and doesn’t rely directly on the nebulous idea of ‘maturity’ — a problematic idea because there’s inevitably only a small difference between each age cohort making it hard to draw the process to a stop (if we let 18 year olds, why not 17? And if them why not 16? And if them, why not… and so on).

The trouble with this is that it’s hard to see why this logic doesn’t also apply to any other right gained at 18. The basic challenge of ‘we grant right X at 16, how is it just that we grant right Y at 18?’ applies to all of them. If children are considered mature enough to have opinions on keeping Trident, why shouldn’t they be allowed to buy fireworks? Taken to its conclusion this is saying is that adulthood begins at 16, not that children should vote.

There’s not necessarily anything wrong with this idea, but accepting this puts an end to the idea of graduated maturity. Andrew Rehfeld argues that the defining feature of childhood maturity isn’t that it is or isn’t present but that it is ‘in development’ and I think this chimes with how many people instinctively feel about the subject. Many 16 year olds are on average probably mature enough to be citizens, but 18 year olds are on average more so and 14-year-olds on average less so — hence a structure that grants legal rights at intervals and removes qualifications on rights as a person ages seems to fit nicely into this. So given this, how should voting rights be handled? Highest bundle? Lowest? Rehfeld leans on the idea of California state senator John Vasconcellos, who argued that rather than debate at which point we turn on voting rights, we should do it gradually and give fractional votes to citizens under the age of 18.

Rehfeld actually goes far further than most child voting supporters, not simply arguing that 16-year-olds should have half a vote until they turn 18, but that we should go far lower and each year from 12 a person should gain 1/7 of a vote until they have their full vote at 18 (Vasconcellos’s fractions were different but same basic idea). The basic idea of gradualism I think is a good one because it sidesteps the problem of a ‘race to the bottom’ above as this approach reflects differences in maturity rather than similarities. Practically the vote count would be different but not unmanageable and could still be done with a hand count — at its most basic you could use separate registers for each birth year, colour-code the voting slips and then count these votes separate from the main piles.

Now that some people should have greater voting power than others is a commonly-had and commonly-rejected idea. Ultimately that each person has one vote is a compromise, as any other scheme arguing that certain citizens are wiser and so should have greater voting powers would not be generally accepted and so would undermine rather than enrich the democratic process. I think children are a special case in this sense as the fractional vote represents a process rather than permanent division. It allows for what I think is a reasonably common sense view on the maturity of children to be expressed, while at the same time recognising that children represent real interests (that are distinct from any other group) and should have a say in matters.

Even as a reduced voting block this would still introduce a sizeable number of people to the electorate so it is far from a token vote, and as a result children would grow and be socialised into citizenship rather than having it thrust on them all at once. Every citizen would experience their first general election while part of an institution that can provide support and education about the process. This is a more radical approach than votes at 16, but I think it ultimately accomplishes the same aims better and would create a future-proof framework for dealing with child voters. Worst case, we add a few more voters to the large number who already have no idea what they’re doing. Best case, this gives us a political system more tuned to the needs and concerns of the young and more children who enter adulthood as politically aware individuals.

While Votes at 16 advocates spend a lot of time talking about how 16 year olds are similar to adults, I think a far more interesting argument is to think about how children are different. Children represent a distinct interest, a massive consumer of state services (which occupy and direct a large amount of their time) and yet the argument is often they are so like us that it would unfair not to include them, not that they are so different we are missing a vital voice. As John Wall put it:

[C]hildren may not always have as much autonomy or power as adults, but they are every bit as different. If the purpose of democratic representation is to respond to the fullest possible diversity of social experiences, then it includes responding to children — and to children’s endless diversity — just as much as it does to adults. Indeed, children would take on a heightened status as the most important test of being democratic, since they are more likely than most to call for political responsiveness from the whole. Being represented in the political sphere should not depend entirely on how competently one can argue for one’s interests or how effectively one can struggle against others for power. It should depend finally on how different one’s experiences are from those of others. (p. 10)

The right to vote should be as expansive as possible because those voted into office are given power over the lives of all. It should be presumed that everyone can vote unless a compelling argument can be provided for exclusion. Children’s right to vote is important if elected representatives are to perform their democratic duties of challenging historical marginalisation and responding to constituents’ fullest differences. (p. 12)

From this perspective because the notion of letting children vote is unsettling is an excellent reason to do it — it will disrupt current power relations in a way that improve society. Democracy shouldn’t simply reflect other power structures (the rich having more of a say than others, men wielding more decision making power than women) but should work to undermine those structures by expressing the always radical notion that everyone deserves an equal say.

This line of thinking says that the unfairness is temporary for all individual children (everyone grows up and is able to vote) is hollow comfort because their ‘difference’ representing the distinct interest is lost. When thinking about votes below 18, I think this is the interesting problem. Maybe it’s a problem we’re willing to live with! But when we say no to votes below 18 it is more than saying ‘wait a few years’ to politically engaged 16 year olds, we are losing this unique perspective.